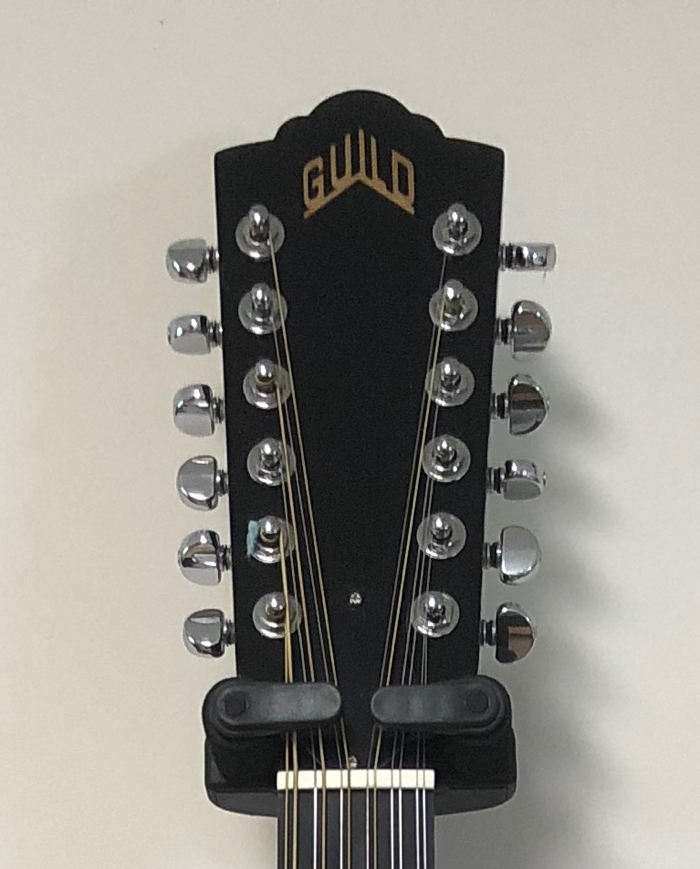 A friend’s son hand-delivered to me his dad’s Guild 12-string, a 90’s D4-12 NT, for repair. This was an $800 guitar brand new out of Westerly, RI featuring a mahogany archback with mahogany sides, plastic fret position dots, plastic binding, minimal plastic purfling, dark-tinted (brown) back and sides, a satin finish, and a very unattractive soundboard with obvious runout (one half was visually much darker than the other). The bridge had lifted significantly, making the guitar unplayable. I told him I thought I should be able to repair that for him fairly quickly...once I was able to get to it. My plans were to keep the guitar in original condition. Ah, the best laid plans...

One year later - What should have been a simple repair had become a complete remake. Here is what happened:

With the strings loosened, the guitar went back into its case and took its place in line amongst the projects. Three or four months had passed before the Guild found its way again onto the shop bench, where I would begin to address the bridge lift. 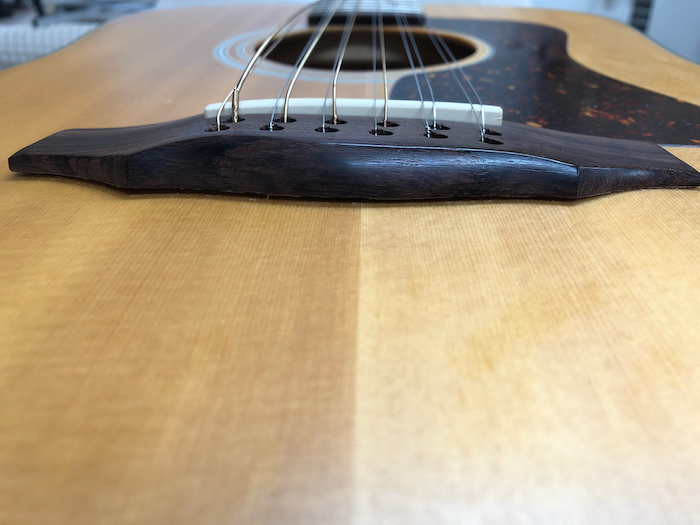 There are two reasons why a bridge will lift. The most common reason being that the glue simply fails to secure the bridge to the soundboard, being overcome by a mere 250 lbs of string tension which is effectually trying to rip it off the face of the guitar. Repairing a guitar whose bridge has pulled away from the top due to glue failure under the bridge can be a very straightforward effort. Glue is squeezed into the opening and the bridge is clamped down to allow the glue to dry. All done!

The other cause of bridge lift is much more rare and is not due to the failure of the glue at all but rather the failure of the wood that the bridge is glued to. While it may be possible for the wood beneath the bridge to simply "let go" and shear off, this has never been my experience. Instead, what I have witnessed is the glue first fails at the soundboard bracing (the "X" brace, in this case). This failure permits the soundboard to really "belly" upward, away from the bracing. The bridge is inadvertently angled forward just enough to let the string tension have its way. The wood shears and the bridge either tears off completely or {worse} pivots forward and resembles the more common bridge lift due to glue failure.

When I had first seen the guitar, when it was first brought to me, I had assumed (and hoped) the bridge lift was due to bridge glue failure. When inspecting a bridge lift it is customary to check for bracing glue failure, which I did. That is when my suspicion was aroused, suspicion that the bridge lift was due to wood shear, not bridge glue failure, as I was able to slide a palette knife between a significant section of the "X" brace and the soundboard. A common repair shop solution at this stage is to force glue between the brace and soundboard, clamp it closed and glue the bridge back down.

I don't do common very well. So I set out to verify my suspicion by removing the bridge. 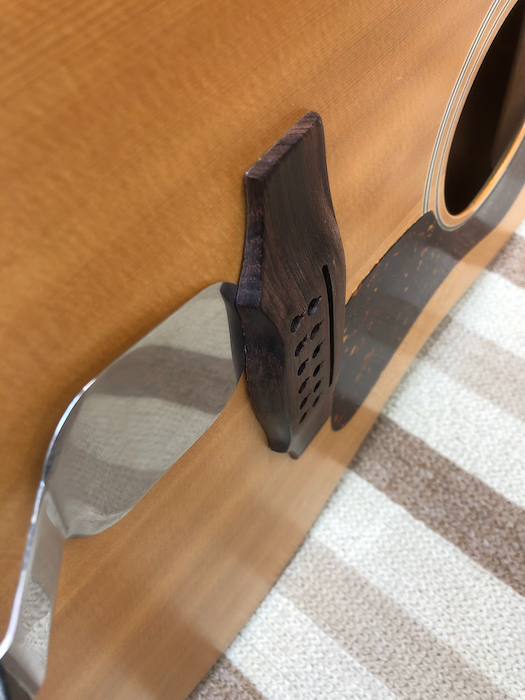 I glued the splintered wood down, then routed out the outline of the bridge down to the bridgeplate. I added new wood into the routed cavity and planed it smooth. I added glue between the brace and soundboard in the section where I had been able to slide the palette knife and left everything to dry. I then prepared the guitar for refinishing 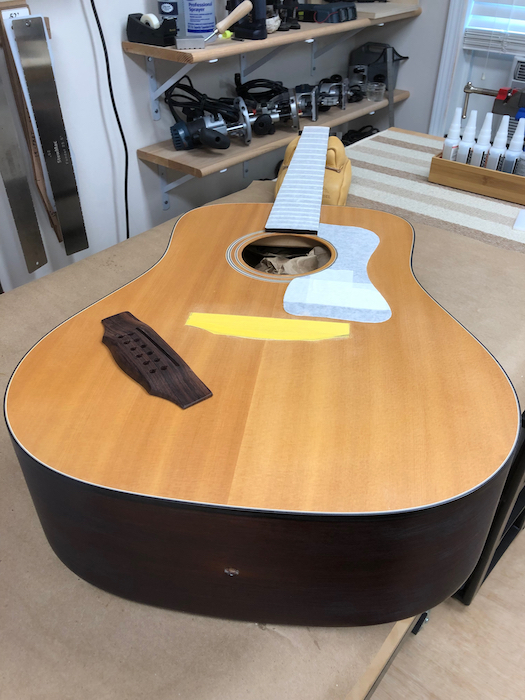 I did a complete fret job on the guitar, as the frets were original from 1994. I fashioned a bone nut and saddle and strung the guitar, eager to hear the results. The sound did not disappoint, as it was quintessential Guild. I recall walking the instrument out to my wife so she could hear it.

I left the instrument overnight with the intent to buff it out the next day. I almost contacted the owner's sons with the good news, but became busy with something and never called. 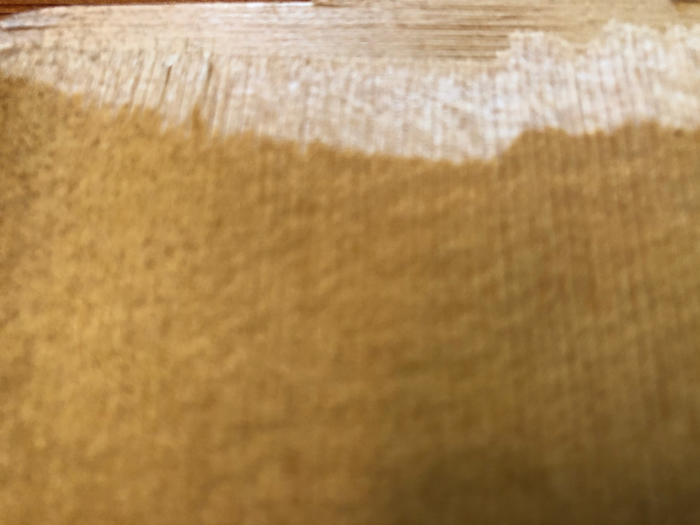 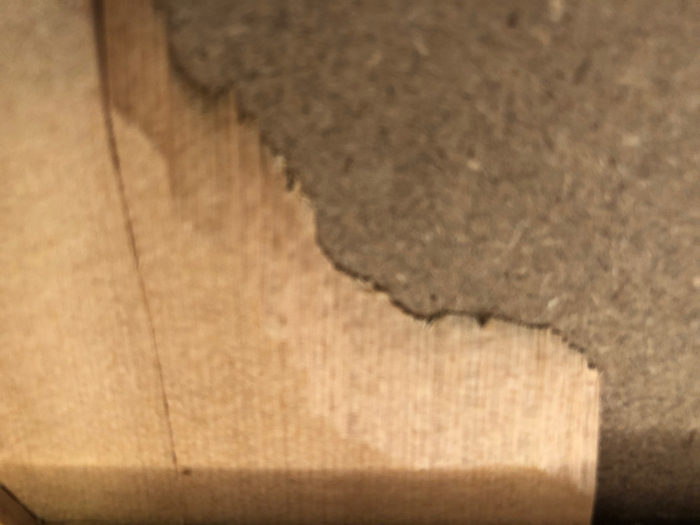 There was only one thing to do at this point: this guitar was getting a Cozad overhaul! That meant first removing the neck. In the event I am going to put things back together and retain the original finish, I like to carefully scribe the lacquer where the neck joins the body, as it makes fro a cleaner removal... 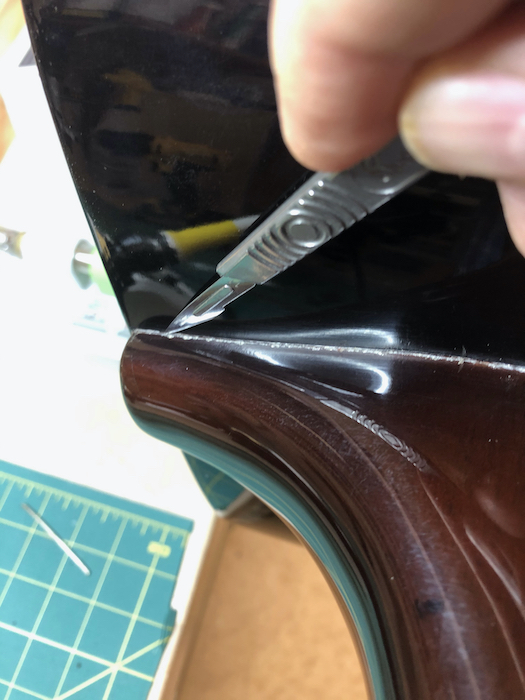 Preparing to Remove the Neck

Having removed the fretwire directly above the neck-to-body joint, I drilled two holes through the fret slot and down into the dovetail joint. A little heat using my favorite no-water-necessary neck removal tool (simply an accessory tip for my digital soldering station) and the neck came off nicely. 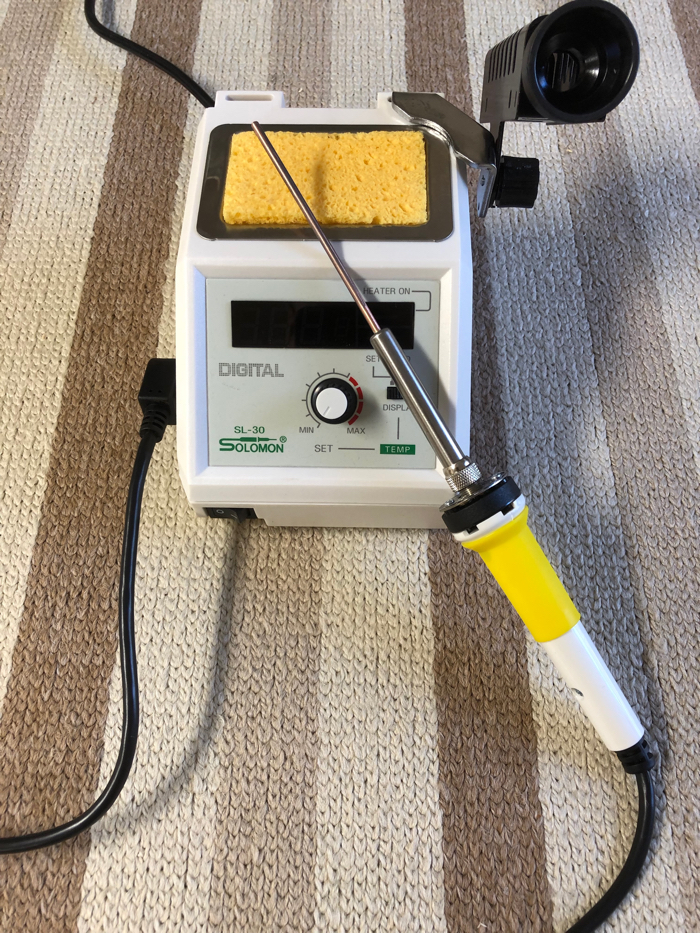 The dovetail tenon was one of the most chewed up and sloppiest cut tenons I have ever encountered, quite a surprise for a Guild guitar. I can only guess at what decisions were made back when this guitar was assembled. I rebuilt the tenon with mahogany and epoxy. 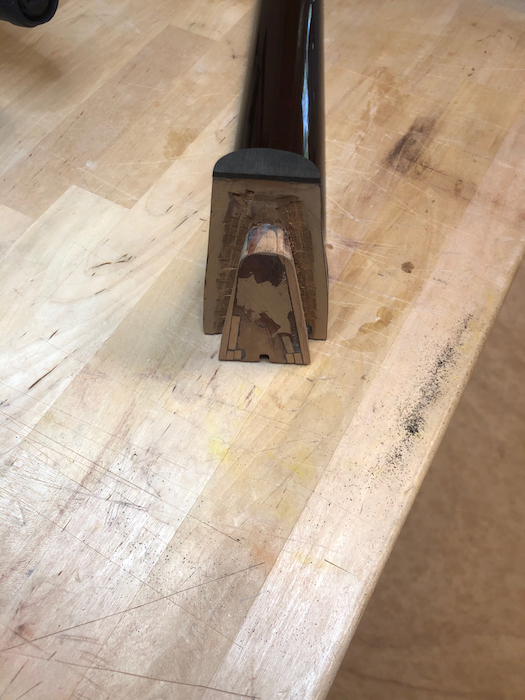 Next up - remove the top. There are two ways to accomplish this task, and both are pretty straightforward. One involves simply cutting through the binding from the side of the guitar. The other involves routing through the top, removing it from the kerfing. I used the first option and had a look insde the box. What caught my eye was the curious addition of a stick lightly glued onto the tailblock. I assume it was used to counterbalance the weight, as the tailblock had been glued on off-center. 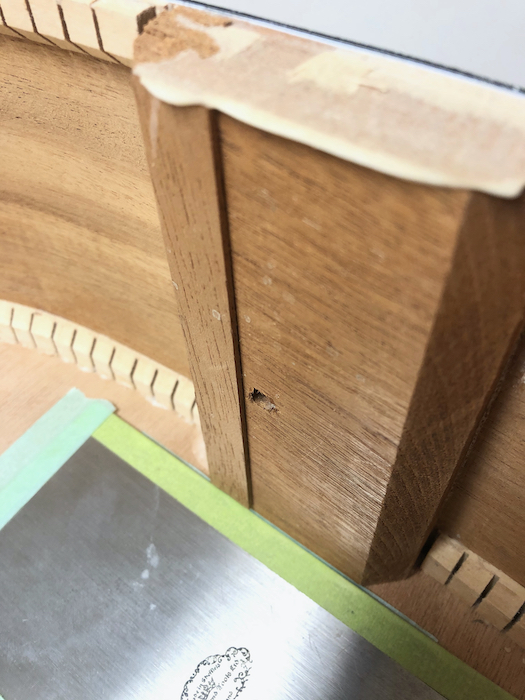 I didn't like the stick, so I took it off. I also braced the sides and cleaned up all the slopped and glopped on glue that had never been removed. 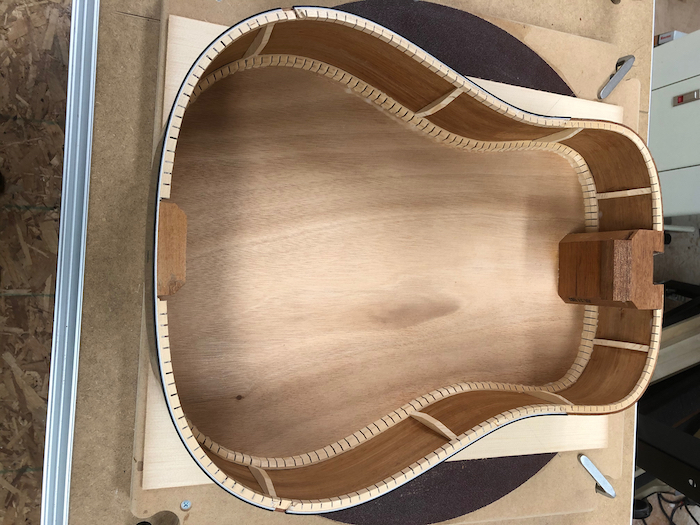 Now I turned my attention to the focal point of the acoustic guitar - the soundboard. I went to my stash of AAA Sitka tops that I had acquired from a former Westerly employee and selected just the right one for my friends guitar. None of that dreaded runout would be allowed back on this instrument, no sir! I started with some Paua inlay around the soundhole. 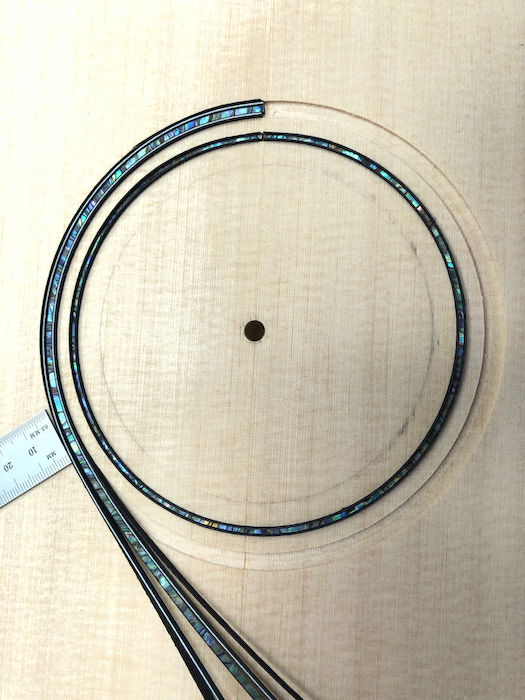 I custom cut my braces from a large stash of Adirondack (Red) Spruce. I radiused the braces to fit the slight countour of the inside of the top. 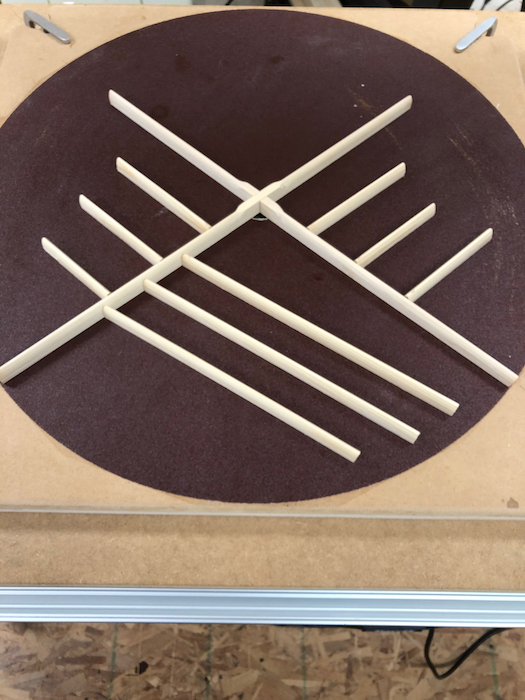 I wanted to effect some increased bass response over what I had heard from the D4-12 (prior to its demise), so I widened the "X" brace after the spec's of Guild's wider body styles. 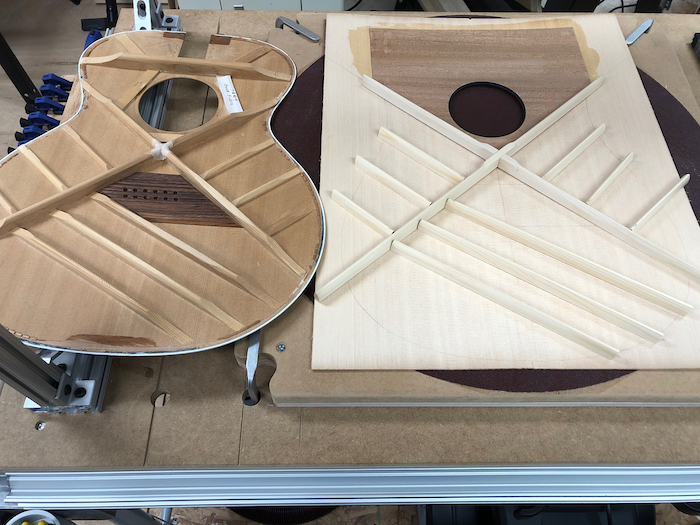 I had determined to stay true to the Guild 12 string bracing pattern, using 3 tone bars. As is my custom for my own instruments, I reinforced the inside of the upper bout with 2 additional layers of Mahogany and added a solid wood soundhole binding. This design negates the need for both a transverse brace and a fingerboard patch. 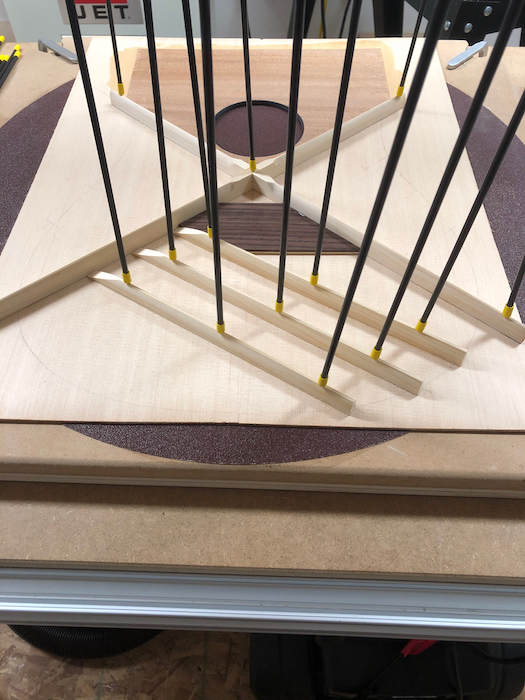 I added a laminated rosewood and maple bridgeplate and shaved the braces. 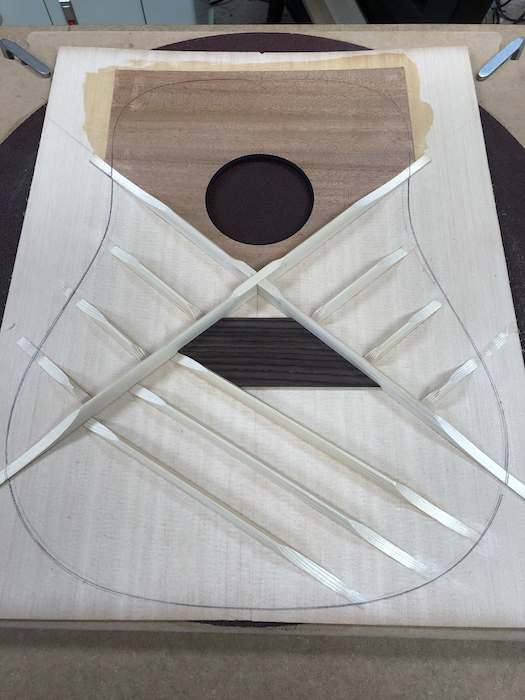 The next step was to attach the soundboard to the body. This is a custom, iterative process, ensuring all parts mate perfectly before adding any glue. I added wood binding and wood purfling around the perimeter of the body. 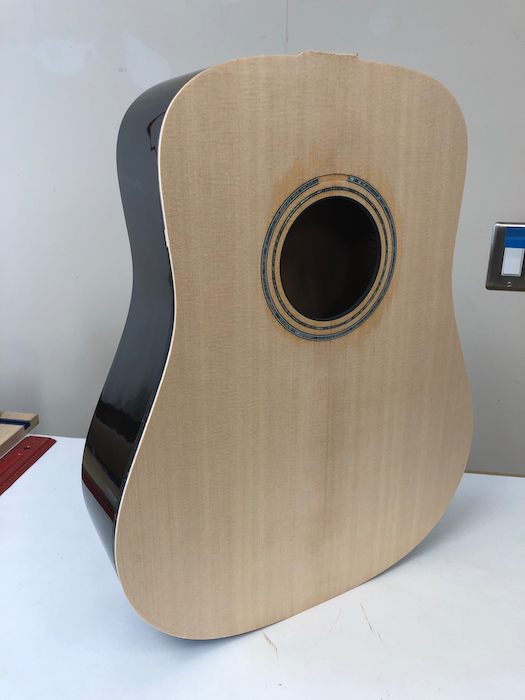 The final step needed to complete the body is to cut the dovetail to mate with the tenon of the neck. 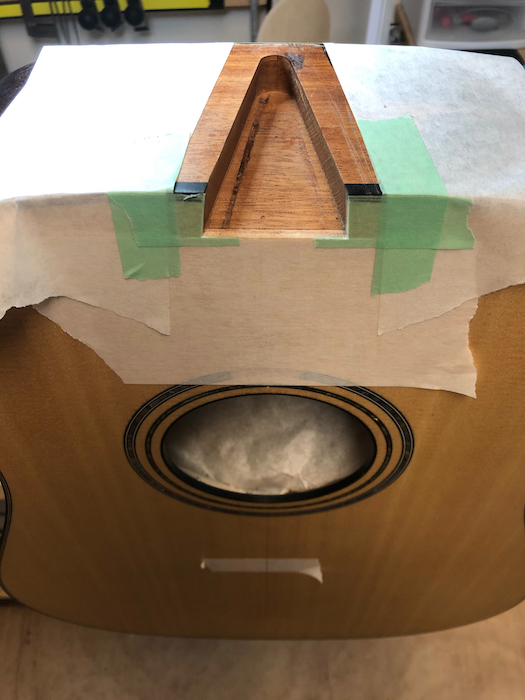 I decided to go all the way and fashion a new fingerboard and matching bridge. I routed off the old fingerboard to ensure I did not alter any neck dimensions (as I had already cut the dovetail joint and fitted the neck). 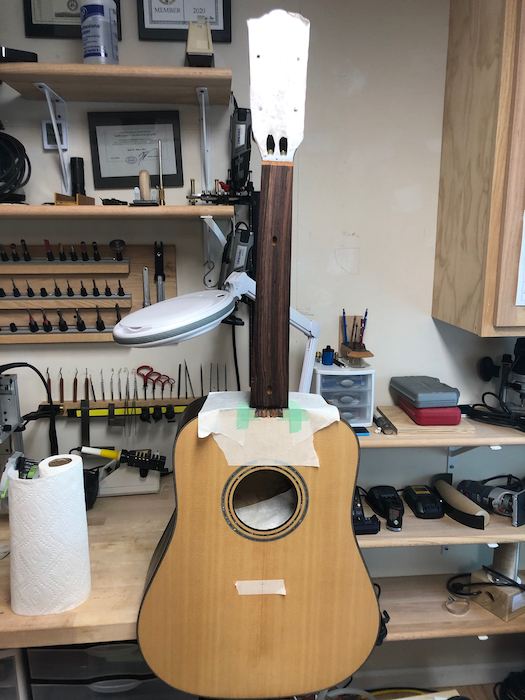 I added Paua fret position markers along with smaller Paua side dots. I sprayed a deep tobacco 'burst onto the arched back (I just had to!) and finished the top with a vintage tinted clear lacquer. This guitar was now ready for a few months of curing. 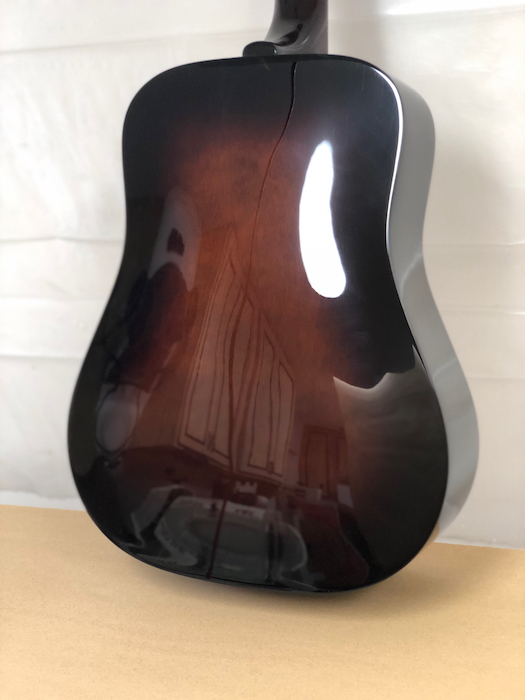 I added the bridge (if anyone remembers at this point, this is where I originally started!) and a custom pickguard. I added frets along with a bone nut and saddle. I strung it up and... 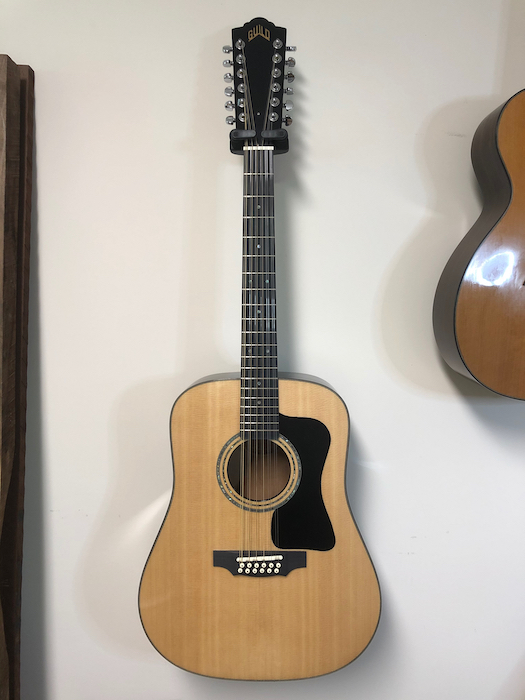 It sounded gorgeous! Lush and deep and rich. Everything you expect from a Guild 12 string. 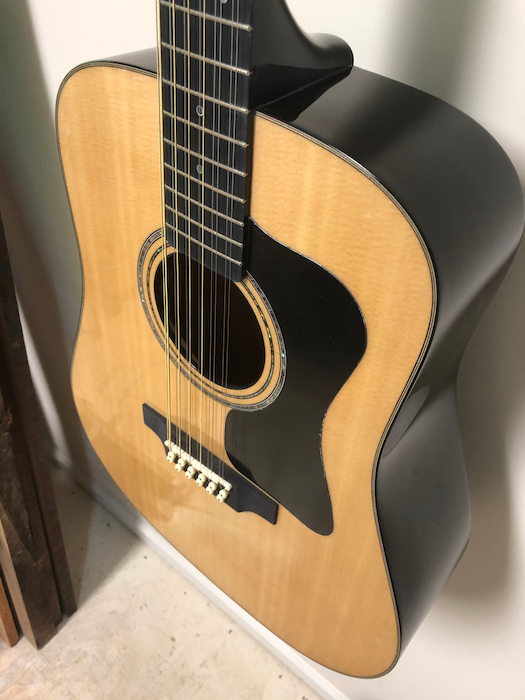 I contacted the sons of the owner and asked if they remembered me. They returned the guitar to their dad, one surprised and happy (new) Guild owner. 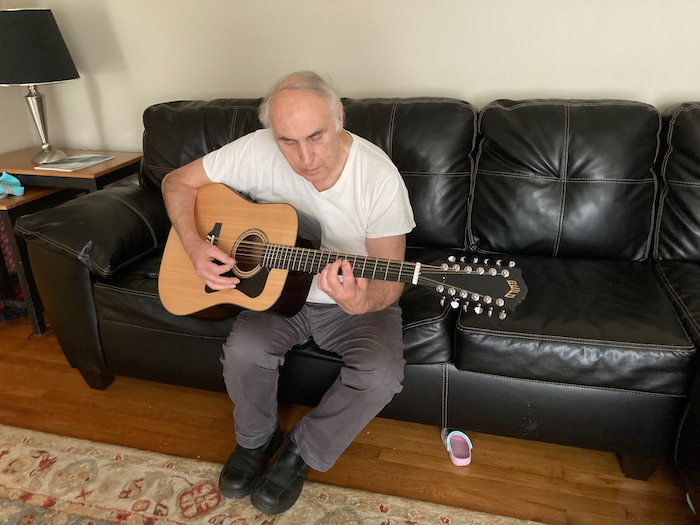 Owner and his Guild